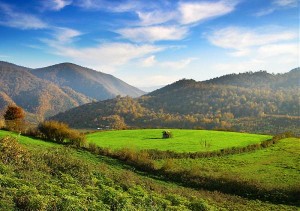 Mazandaran is a Caspian province in the north of Iran. Located on the southern coast of the Caspian Sea, it is bordered clockwise by the Golestan, Semnan and Tehran provinces (together forming Greater Mazandaran, separated from Mazandaran respectively in 1997, 1976 and 1960.). The provinces of Qazvin and Gilan lie to the west. The diverse nature of the province features plains, prairies, forests and jungles stretching from the sandy beaches of the Caspian Sea to the rugged and snowcapped Elburz sierra, including Mount Damavand, the highest peak and volcano in the Middle East and Western Asia, which at the narrowest point (Nowshahr County) narrows to 5 miles.

Mazandaran is a major producer of farmed fish, and aquaculture provides an important economic addition to traditional dominance of agriculture. Another important contributor to the economy is the tourism industry, as people from all of Iran enjoy visiting the area. Mazandaran is also a fast-growing centre for biotechnology and civil engineering

Mazandaran was part of the ancient Hyrcanian Kingdom and the Kingdom of Tapuria. Indigenous peoples of the region include the ethnic Mazanderanis and Tapurians,] speaking a Caspian language which most resembles Gilaki and Sangiseri.

Roads
Mazandaran is connected to the capital of Iran, Tehran, through three transit roads of Haraz (Amol-Rudehen), Kandovan (Chalus-Karaj), and Firouzkouh (Qaem Shahr-Firouzkouh).

Railway
Mazandaran is served by the North Railway Dept. of the Iranian Railways. The department connects the province to Tehran to the south and Gorgan to the east. The cities of Sari, Qaemshahr, and Pol Sefid are major stations of the department.

Significant natives of Mazandaran
Mazandaran has been home to many significant Iranian figures. These range from scholars and poets to politicians and actors. Perhaps the most notable Mazandaranian figure is Reza Shah Pahlavi who was born in Alasht, Savad Kooh, Mazandaran in 1877. Reza Pahlavi became the Iranian Shah from 1925 until 1941, when he was forced to relinquish his throne to his son.

Notable Mazandaranian poets include the modernist poet Nima Yooshij, the great late contemporary poet of Iran who was born in Yush, Mazandaran.

Interesting note
Being formerly part of the kingdom of Taparia or Tabaristan, two famous 9th-century Mazandarani scholars are from Mazandaran, both commonly called “al-Tabari” (An Arabic term meaning simply “from Taparia”).

Culture
The culture of Mazandaran is closely related to that of neighboring Gilan (or Guilan) and similarities between the two are abundant. The peoples of the two provinces are largely secular or irreligious, and consequently women have had greater social freedom and independence than their Persian cousins. (Reference: “The Soviet Socialist Republic of Iran, 1920-1921: Birth of the Trauma” by Cosroe Chaqueri.)

The cuisine of the province is very rich in seafood due to its location by the Caspian Sea, and rice is present in virtually every meal. Indeed, the rest of Iran was introduced to rice through Gilan and Mazandaran. Before the 1800s, Persians, Kurds, and other Iranian ethnic groups used bread rather than rice as an accompaniment to their meals, though bread remains a prominent staple among them. While bread remains very popular among those groups, in Gilan and Mazandaran, rice remains the choice staple of the indigenous inhabitants.