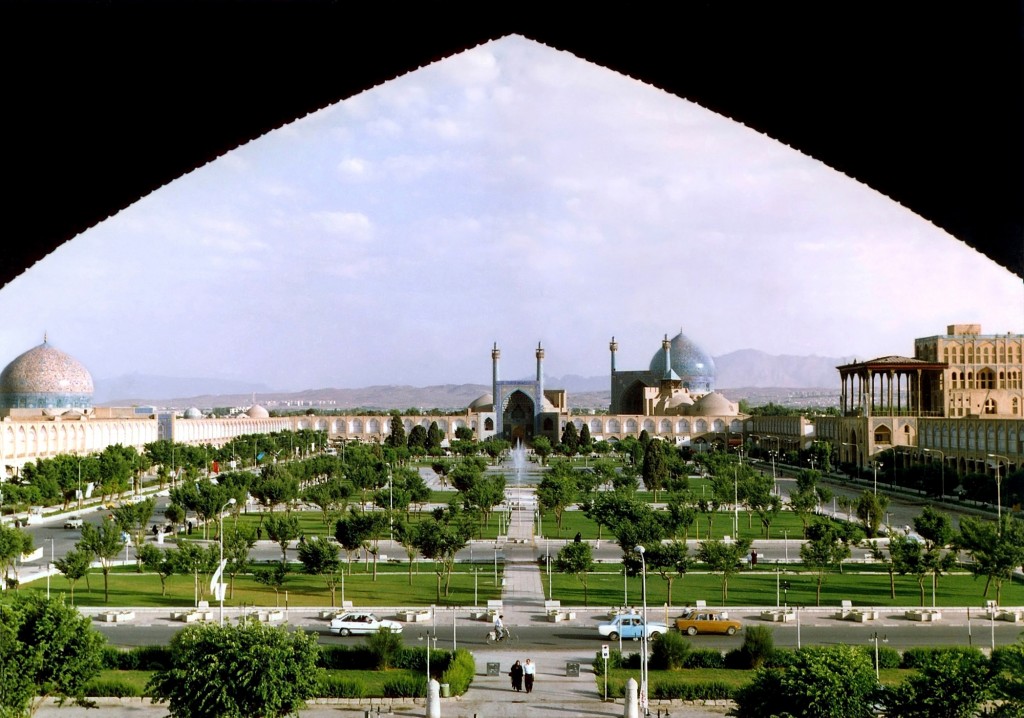 (Persian: Esfahān, Old Persian: Aspadana, Middle Persian: Spahān), historically also rendered in English as Ispahan or Hispahan, is the capital of Esfahan Province and Iran’s third largest city (after Tehran and Mashhad). Esfahan City had a population of 1,583,609 and the Esfahan metropolitan area had a population of 3,430,353 in the 2006 Census, the second most populous metropolitan area in Iran after Tehran.

Esfahan is located on the main north-south and east-west routes crossing Iran, and was once one of the largest cities in the world. It flourished from 1050 to 1722, particularly in the 16th century under the Safavid dynasty, when it became the capital of Persia for the second time in its history. Even today, the city retains much of its past glory. It is famous for its Islamic architecture, with many beautiful boulevards, covered bridges, palaces, mosques, and minarets. This led to the Persian proverb Esfahān nesf-e jahān ast: “Esfahan is half of the world”.The Naghsh-e Jahan Square in Esfahan is one of the biggest city squares in the world and an outstanding example of Iranian and Islamic architecture. It has been designated by UNESCO as a World Heritage Site. The city also has a wide variety of historic monuments ranging from the Sassanid to the Safavid dynasties. Remaining Islamic architectural sites were built from 11th to the 19th century while older pre-Islamic monuments date back to 1000 B.C.

Geography and climate
The city is located in the lush plain of the Zayandeh River, at the foothills of the Zagros mountain range. The city enjoys a temperate climate and regular seasons. No geological obstacles exist within 90 km north of Esfahan, allowing cool northern winds to blow from this direction. Situated at 1590 meters above sea level, Esfahan is still very hot during the summer with maxima typically around 36 °C (97 °F). However, with low humidity and moderate temperatures at night, the climate can be very pleasant. During the winter, days are mild but nights can be very cold and snow is not unknown. However, on the whole Esfahan’s climate is extremely dry. Its annual precipitation of 113 millimetres (4.4 in) is only about half that of Tehran or Mashhad and only a quarter that of more exposed Kermanshah.

The Bridges of Isfahan
The Zayandeh Rud (river) starts in the Zagros Mountains, flows from west to east through the heart of Isfahan, and dries up in the Kavir desert.

The bridges over the river include some of the nicest architecture in Isfahan. The oldest bridge is the “Pol-e Shahrestan” which was probably built in the 12th century during the Seljuk period. Further upstream is the “Pol-e Khaju” which was built by Shah Abbas II in 1650. It is 123 metres long with 24 arches, and it also serves as a sluice gate. The next bridge is the “Pol-e Jubi”. It was originally built as an aqueduct to supply the palace gardens on the north bank of the river. Further upstream again is the Si-o-Seh Pol or bridge of 33 arches. Build during the rule of Shah Abbas the Great, it linked Isfahan with the Armenian suburb of Jolfa. It is by far the longest bridge in Isfahan at 295m.

Fesenjan
A casserole type dish with a sweet and tart sauce containing the two base ingredients, pomegranate molasses and ground walnut cooked with chicken, duck, lamb or beef and served with rice.

Gaz
The name given to Persian Nougat using the sap collected from angebin, a plant from the Tamarisk family found only on the outskirts of Esfahan. It is mixed with various ingredients including rose water, pistachio and almond kernels and saffron.

Khoresht-e mast
“(yoghurt stew) is a traditional dish in Esfahan. Unlike other stews despite its name it is not served as a main dish and with rice; Since it is more of a sweet pudding it is usually served as a side dish or dessert. The dish is made with yogurt, lamb/mutton or chicken, saffron, sugar and orange zest. Iranians either put the orange zest in water for one week or longer or boil them for few minutes so the orange peels become sweet and ready for use. People in Iran make a lot of delicate dishes and jam with hull of fruits. This dish often accompanies celebrations and weddings.
Esfahan is famous for its Beryooni. This dish is made of baked mutton & lungs that is minced and then cooked in a special small pan over open fire with a pinch of cinnamon. Beryooni is generally eaten with a certain type of bread, “nan-e taftton”.